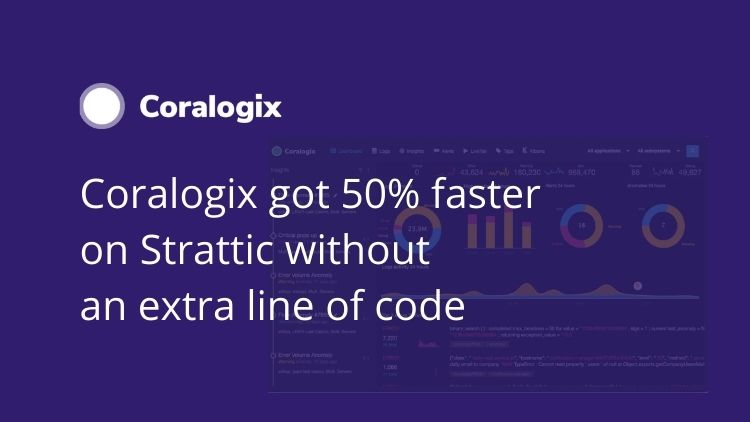 Coralogix maps your software flows, automatically detects production problems and delivers pinpoint insights for your log analytics. They have been featured in publications like TechCrunch and have raised over $41M to date.

Coralogix started using a page builder on their WordPress site to get the flexibility of being able to design and build pages quickly, but unfortunately that took a toll on their site speed, causing it to be twice as slow.

Also, as Coralogix geared up for a massive PR launch about a new funding round, they needed to make sure the site was resilient and would stand strong for the influx of traffic.

Because of these concerns, Coralogix started looking for a solution that would allow them to confidently generate leads, without having to worry about their site’s performance.

According to David Bitton, senior product marketing manager at Coralogix, it was an obvious decision to start using WordPress page builders to simplify the design and development process for new pages but they quickly ran into performance issues with page load time.

Jamstack to the rescue?!

Like many who have the task of “just” optimizing their site, Coralogix started researching tips and tricks for how they could improve their slow load times. Along the way, they stumbled upon the relatively new Jamstack (also known as static) concept.

Bitton shares, “I started researching this new static website approach that I wasn’t really familiar with and thought hey, that could be a viable option, but then I realized that I’d need an experienced developer and it would basically mean going back to square one, which is a completely custom site where we wouldn’t have the ability to create and modify pages as quickly.”

Hosting on Strattic: Have your page-builder cake and eat it too

After trying Strattic out, Bitton said “obviously the idea of not having to rip out all of our current WordPress plugins, including of course our page builder, Elementor, was the biggest draw for me. And the effects were immediate. We cut down our load speeds by at least half on Strattic. And once it’s cached on the CDN, it’s even faster.”  Bitton continues, “we actually never achieved that kind of speed ever. Even when we had CloudFlare running, it helped, but never got the load time to where we wanted it to be.”

“The feeling we have with Strattic is that we can have our cake and eat it too. We don’t have to rebuild everything just to solve this one issue of optimization,” added Bitton.

After drilling down into the speed data, Coralogix found that the most striking speed gain with Strattic was the server response time. Before Strattic, time to first byte was 3 seconds and now it’s down to 0.22 seconds! And all without a single extra line of code, since Strattic handles speeding up a site by converting a WordPress site into a flat HTML site and serving it up through a CDN.

Increased speed under heavy load (and no provisioning needed)

In anticipation of a PR campaign centered around their latest funding round, Coralogix was positioned to garner the attention of publications like TechCrunch. Based on their past experience with servers, they were anxious that their site may slow down from the onslaught of traffic.

“We were so used to putting pressure on our hosting provider to increase the resources before you hit the max so I reached out to Strattic support and it was very refreshing to hear that it didn’t work that way. I was assured that not only would I not need to worry about provisioning the server, but that my site will likely get even faster,” says Bitton.

In fact, it later turned out that at the peak of traffic, with many concurrent users, the server response time got 21x faster than their original pre-Strattic baseline of 3 seconds, and 1.6 times faster than the already fast Strattic time – further improving (crazy, but true!) speed from 0.22s down to 0.14s.

Google encourages sites to be fast since their goal is to provide users with the best possible results. “Best result” is an entire topic unto itself, but even if a result is relevant, users are likely to bounce (leave the site quickly) if the site loads slowly. A fast site also improves user experience, trust, brand loyalty and conversion rates.

“There’s obviously many factors when it comes to SEO, but since moving to Strattic and benefiting from the speed gains, Coralogix’s SEO has improved significantly,” says Bitton.

A side order of security

Often, companies come to Strattic with a particular problem such as speed, and then once that’s resolved, they can explore the other benefits that come with the platform such as security.

“The other side effect, or benefit, was that before Strattic we didn’t allow freelancers to have access to our WordPress site. We were very concerned about our site getting hacked. But once we moved to Strattic, we understood that there’s another layer now of security and felt more comfortable giving them access. This allowed me, as the person managing them, to be a lot more effective and today they’re uploading everything by themselves, which saves me a ton of time and gives me peace of mind,” explains Bitton.

Being a hi-tech startup, we really understand the value that Coralogix brings to the world of monitoring and logs. We are so happy to handle the heavy lifting of speed, security and scalability for their WordPress website so the Coralogix marketing team can focus on their strategic goals – generating leads for their incredible product.

“We really have a lot of appreciation for what Strattic is  doing. Honestly, I never dealt with such a clear-cut value from a vendor, and your support is really great. Strattic was just a complete no-brainer,” says Bitton.

Strattic sends the love right back to you guys! ❤️ 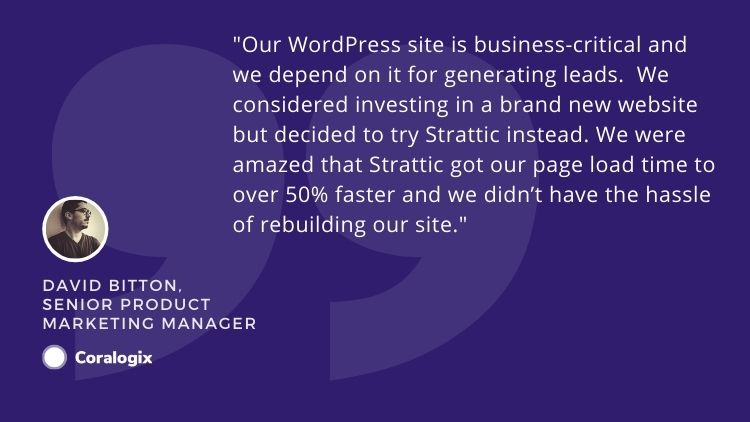